Here we go with Leafer Box, an easy accesible box, and of course it was about Love (and talking of love, I love that tissue paper they use in the boxes!)

Let’s see what was inside, starting from the book and going clockwise:

All in all a lovely box once again.

If you’d like to buy one, you can use code KESTREL10 for 10% off. You can find them here in several genres.

This is the other cheap (as in price) book box out there and it is like a complimentary sibling of Wildest Dreams, as it doesn’t do the Young Adult genre. 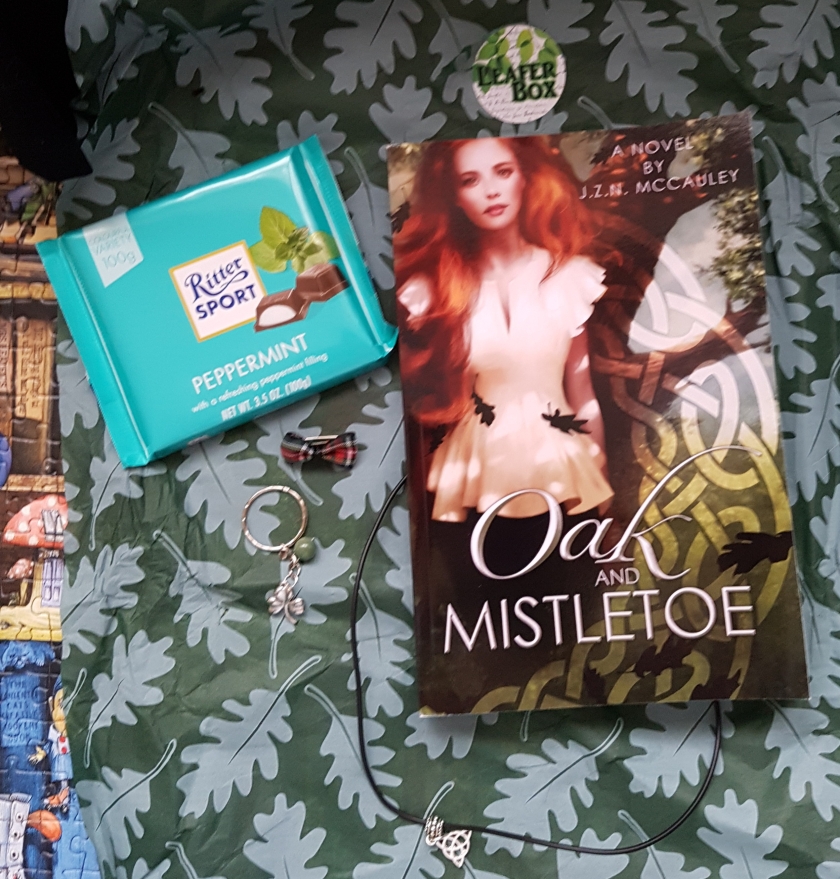 I usually get a combo of sci-fi and fantasy but this time I just felt like having Fantasy and not both. So let’s have a look at the contents:

Not a bad box at all, so if you are interested in getting you can use code KESTREL10 to get 10% off.

Just in case you didn’t know, Leafer Box are UK based and the cheapest book box out there (that is not just book). And for December, I collaborated with them and designed an exclusive bookmark.

I get a custom box, which bundles up sci-fi & fantasy and only gives me one chocolate and one of any item that may be repeated, clockwise starting at the chocolate:

As per usual, an amazing box.

Also, I am giving away one of the theme of your choice on my twitter @themoonkestrel, if you’re interested. it ends on Boxing Day (26th of December).

Before I unbox this lovely box (it is the cheapest box I have found), let me tell you that December’s boxes will include an exclusive colouring bookmark design by me. This design won’t be available in the shop and can only be found when purchasing a Leafer Box.

Just as a reminder, I receive two boxes in one (which means only one chocolate and no repeat items). This time I went for the Historical one rather than Fantasy (the theme appealed more to me), and it is my first “Historical” box.

So let’s unbox it, starting from the chocolate and going clockwise:

As per usual, I was very pleased with my box. It is less main stream but most of the items make me happy and I think it is the box that has the least “set apart to give away” items ever. (As I mentioned in my 101 post, it is normal to choose not to keep some items).

If Leafer Box sounds up your street, you can purchase the November box until the end of the month and then the December one as soon as it is the 1st of December. If you use code KESTREL10 you can get 10% off any purchase and there are several genres to choose from.

As you may know, Leafer Box is one of my “permanent” boxes. There are a lot of good reasons why I love it:

My list could go on but I’d rather just show you my bundled Fantasy & Sci-Fi box.

Starting from the chocolate bar because chocolate and going clockwise:

As you can see, the box(es) was packed full of goodies and it is a great bang for your buck. Absolutely recommend it and there are several other genres you can try.

Since I was very happy with Leafer Box last month, I messaged them and asked if there was a way to bundle up the Sci-fi and Fantasy boxes into one. Skip one of the chocolates (since technically each box comes with chocolate) and if there are ever repeat items between boxes, skip those too. I also really liked their logo sticker so I asked if they would kindly send some so I could use them to decorate my drawing clipboard and/or laptop, and they did!

Also, drum roll please, after promoting them unofficially, I am now an official rep for LeaferBox which absolutely made my day once we agreed on it. (They are quite small so there was no rep search but I have seriously been recommending them after being impressed with the boxes).

So the contents of my mixed box are as follows (I tried to leave Fantasy in one side and Sci-Fi on the other but it is also a mix so there you go). Starting on top left corner with the book.

Overall I was very happy with the box(es). Each box is almost half the price of most other subscription boxes (£12.99, shipping is not included but for UK is £2.99 , keeping still very affordable) and the only “downside” is that the book isn’t a super hyped YA read that is about to release or has only just been relased. I can live with that, since most of the time, by the time I get to those books they are not that new, woops (hey, I read Book Box Club books first and whatever my mood wants).

If you think this is the box for you and would like to give it a go, there is an even better pro: you can buy it any day of the month. To get September’s box, any day in September that you submit your order, you will get the September box, it can be the 1st, 12th, 26th or 30th and you will still be able to get it. They usually are quick to ship boxes and mine usually arrives next day or two days after shipping (not bad at all).

Are you convinced now? You can choose from Historical, Sci-fi, Fantasy, Chick-Lit, Comedy, Thriller or Surprise. And you can use code KESTREL10 for 10% off whatever you buy (1 month, 3 months, 6 months). Just remember this does not renew automatically so you have to visit their etsy page to buy the next one.

If you remember my long post about subscription boxes, I mentioned LeaferBox.

This is a UK based box that sells through Etsy rather than Cratejoy or their own site. It is also not Young Adult exclusive, instead you get a choice of genres of books to pick from.

Having had a quick conversation with them, currently the only boxes that have a monthly theme are the Historical and Fantasy ones since they are the ones that sell more, but they are not the only ones they sell.

You can choose between Historical, Sci-fi, Fantasy, Chick-Lit, Comedy, Thriller or Surprise (for when you’re not sure which one you want and any will do, or you just like surprise). In each category you can either buy a single box (it does not renew automatically), 3 months or 6 months. Neither option renews itself so once it is done you can decide which one you want next if you do.

Any way, I was divided between trying the Sci-fi one and the Fantasy one, but decided to go for one I didn’t know the theme (Fantasy this month is Mermaids). The wonderful thing is that you can buy the month’s box any day of that given month (which is great because the cut off date is just the end of the month).

So without more rambling from my part, here are the contents of the box.

Most of the lovely extras were beautifully wrapped in a leafy tissue paper (I thought it was such a sweet little extra thing) and the book was not wrapped (I don’t mind).

The box included some fruit tea called Grandma’s Garden, a cute tea bag shaped infuser (I already have found my most favourite infuser so probably won’t use this one, but that does not take away the cuteness factor and that they thought about how to help you deal with loose leaf tea). There was also a timey whimey Tardis official merchandise Doctor Who bookmarks (isn’t it lovely?). A delicious Ritter Sport (last night I told my boyfriend that I had to take pictures of this box there and then because I couldn’t resist wanting to eat the chocolate and could not wait any longer, so I did -this was the actual day I received the box-). And an absolutely stunning gorgeous galaxy pendant necklace that has made me swoon so much.

Finally, the book included was HellHole which I probably wouldn’t have chosen on my own but it sounds interesting and will definitely be read.

Look at that wonderful galaxy pendant, isn’t it gorgeous?

All in all I was pleasantly surprised with the box. So much so that I ended up having a quick conversation on Instagram with them and bought the Fantasy box because Mermaids, right?

This box reminds me a lot of the simplicity of Novel Tea Club (which closed at the beginning of the year) and I am loving it very much. It is also more affordable at £12.99 + shipping than most book subscription boxes, so that’s a plus.

Have you tried LeaferBox? Would you consider it? Let me know your thoughts.