This was a special edition box by SpearCraft Book Box, and it was without a book. I have to be honest, I had forgotten I had ordered it until the email arrived into my inbox saying I had a box coming my way and it had been paid. Then I checked and it was this (comes to show I ordered too many sub boxes last year, right?). It arrived a bit after Christmas so I didn’t take pictures of it in the theme appropriate jigsaw (because I had already packed it by the time this arrived…)

But now let’s check the contents, starting on the top right corner and going clockwise:

So, the verdict? I prefer Accio boxes if it is something Harry Potter themed. However, this was cute and it was a cosy one but it wasn’t worth it for me as it got hit by customs too, making it too expensive to get to this side of the pond.

So, one of the books I really wanted was Warcross, and when I found out the theme for Spearcraft I was sure it’d be the book I wanted, so I fished discount codes and tried to get it as cheap as possible (because it is on the expensive side with expensive shipping to the UK).

On a funny note, I ended up winning a giveaway for Warcross, so now I have both hardback editions (US & UK). UK edition is the colourful one, US is a robin egg/turquoise colour and smaller. 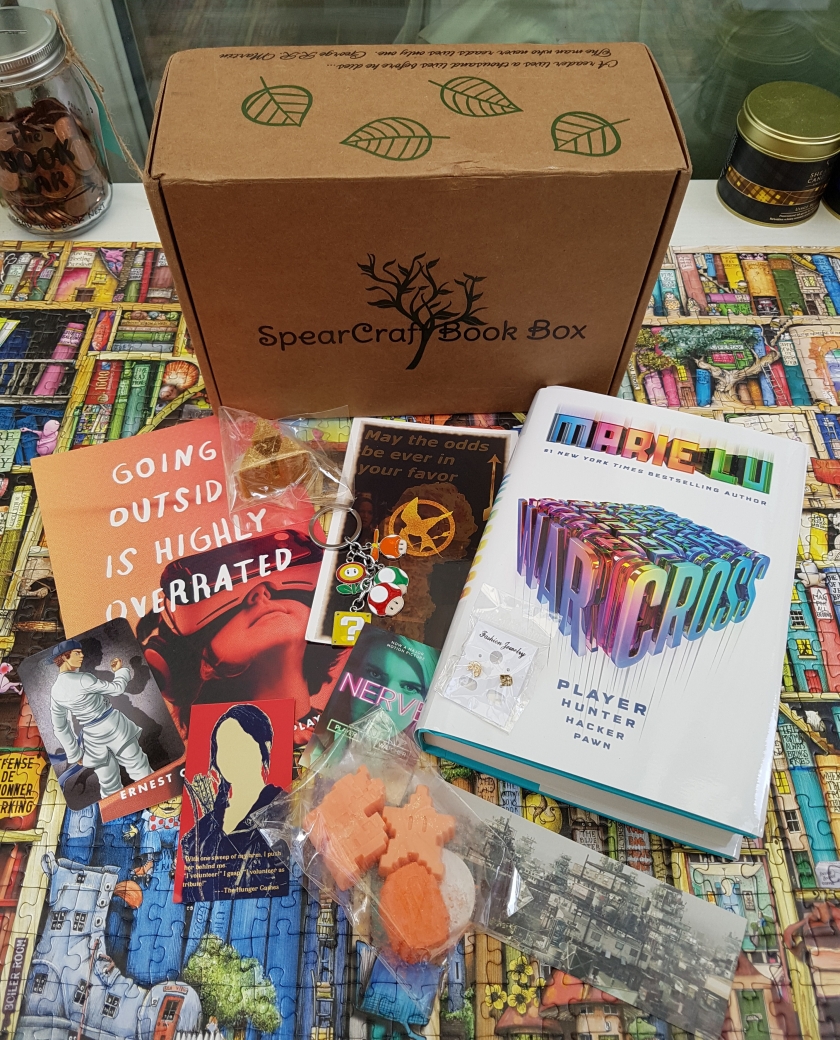 Starting from the book and going clockwise:

**Start of rant about gaming**
I have to admit with such a massive gaming industry and such a diverse choice of games, I was expecting less of the same one (there’s two of each, Hunger Games, Mario Bros and Ready Player One) and more variety. And to me Hunger Games is out of place because it is not a pixel game nor is it console or anything, it is a book fandom (and film if you want to go with that).

I may rant but I love gaming and love games and it was a little like “but why is HG here when there is so much more that could be here instead? So many series of games, so much Nintendo, Sony, Microsoft and all other gaming developers have brought out that we love, why not include them in here?”. PS. I restrained myself from reciting all the possible games that could’ve inspired an item because you’d be stuck in a vortex hole of game names and weird old stuff like Chips or Carmen San Diego and that red hat… Plus the 8 bit music… **End of rant**

Ignoring the gaming bit, it was a nice box though I do prefer when the boxes have less “paper” items and I am happy to get my Warcross book. Due to shipping + box costs, it is not good for me so I haven’t kept it but it will probably be quite good for others in the US.